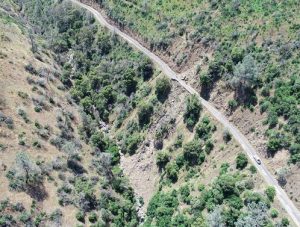 Tuolumne County, CA — Marshes Flat Road received extensive storm damage in March of 2017, and county officials are hoping that final repairs will be completed by October.

There have been numerous challenges along the way.

The Tuolumne County Community Resources Agency has provided an update on the work, stating, “The County’s contractor, Syblon Reid, completed their shotcreting work on the cliff face, leaving a nice neat wall to fasten the proposed concrete corbel (ledge) against.  They have continued drilling the larger diameter anchors, known as tiebacks, into the hillside below the road surface.  These tiebacks are massive, 2.5-inch diameter, 50-foot-long bolts that are slipped into holes drilled vertically into the mountain beneath the road.  In such crumbly, shale terrain, the drilling of the long holes is very challenging, with loosening rocks deep in the ground causing holes to collapse, requiring special techniques to redrill the hole.  Drilling has slowed down because of this, and the Kelly Grade rocks have also broken the drilling equipment on several occasions, causing other delays.”

At this current time, the hope is to have the work completed by early October. Storms in 2017 caused millions of dollars in damage to Tuolumne County roads, most notably Marshes Flat and Ferretti. The Ferretti repairs were completed around the first of the year.