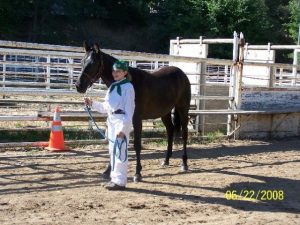 Jamestown, CA — It has been a difficult week for Jamestown’s Margaret Whitelaw since she discovered that her family horse (Midnight Princess) was accidentally killed Monday evening near the intersection of Stockton Rd. and Washington St. in Sonora.

“There are really no words to describe how I feel because this horse was my 14-year-old bipolar daughter’s baby, as she raised the horse since the day it was born,” says Whitelaw. “She totally took care of my daughter (Stefany), and I am a firm believer in the power of animal assisted therapy.”

“This horse and my daughter were totally bonded, so we are devastated,” she adds.

The back door of the horse trailer came open somewhere between Jamestown and Sonora and the horse either fell or jumped out while she was still tied up. Midnight Princess was dead by the time Whitelaw noticed that the gate was open. A second horse was also in the trailer, but was thankfully not injured.

The Tuolumne County Sheriff’s Office is not planning to file any charges because the incident was not intentional and the party in no way tried to maliciously harm the animal.

Whitelaw’s daughter Jessica Haynie, a former Mother Lode Round-Up Queen, and a family friend helped to place the horses into the trailer and both are very knowledgeable when it comes to safety precautions. Whitelaw says it remains somewhat of a mystery why there was a malfunction.

Whitelaw says that while she has eight other horses at home, the family will never be able to replace Midnight Princess.