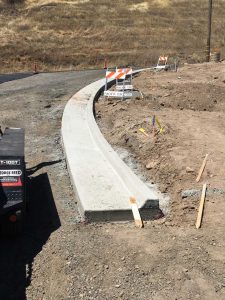 Tuolumne County, CA – Two months into the Caltrans $3.3 million Yosemite Junction Project at the intersection of Highways 108 and 120, the noted flow and safety improvements being added can be seen by travelers.

As pictures in the image box show crews have been busy adding curbs, gutters and a drainage pipe along with paving large areas of the roadway. Caltrans spokesperson Rick Estrada shares that immediately east of the junction, crews are also improving the road as it heads up the steep slope. Estrada adds, “We’ll have a raised median between the east and westbound lanes. That will be an added protection; especially for motorcycles going down there it will keep you separated from other traffic, which is a key safety feature.”

Along with the median the remaining work includes adding a stoplight with a signaled turn lane onto 120 along with a longer yield lane onto 108. One other feature, a crosswalk, has drawn some criticism regarding its need, but Estrada explains its importance, “While I know the crosswalk won’t be used often, it’s always a nice option to have it there. If you’re a cyclist, we like the idea of them getting off their bikes and going the safe way through the crosswalk and then hoping back on and continuing their ride.”

Crews are working day and night shifts. Monday through Thursday, 6 a.m. to 5 p.m. and Friday’s until 3 p.m. Nighttime shifts are Sunday through Thursday from 7 p.m. to 5 a.m. Motorist can expect 15-minute delays during the project that is slated to be completed by the end of summer just in time for the rainy season.

“When it’s wet and rainy out there, the stoplight should be invaluable for people coming from Yosemite [National Park] as well as those coming down the hill and heading towards the valley,” interjects Estrada.