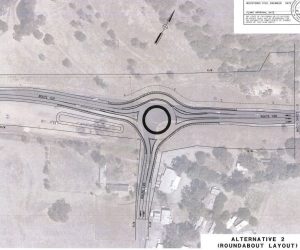 Caltrans has proposed two options; one involving a stop light and the other a roundabout. Both would include adding additional lanes in both directions on Highway 108. The Tuolumne County Transportation Council (TCTC) at its Wednesday meeting approved sending a letter to Caltrans voicing concerns on both ideas.  TCTC Executive Director Darin Grossi says, as stated in the letter, “We are concerned about travel going westbound on Highway 108…you have limited site distance coming down the hill into the intersection. If you’re driving a heavy vehicle, particularly a truck, if you have to stop for a red light, that’s going to be problematic.”  Caltrans has also included in all its plans to cut the bank back for better sight distance but that is a costly fix, according to Grossi.

Additionally, the TCTC letter states a secondary concern with the eastbound traffic that, once past the intersection, must go directly up a steep grade with a single lane that widens to a passing lane farther up the highway.  Grossi explains, “We would like to see the second lane start before the intersection so trucks can cue up there.  We’ve also suggested, if there is a light, it should be coordinated with the light at O’Byrnes Ferry Road and perhaps use technology to identify, when trucks are going in the eastbound direction, to hold the light green so they can keep their momentum going up the hill.”

The budget for the traffic lights is about $2.45 million; $6.4 million for the roundabout. TCTC has offered a third alternative, which would also add more traffic lanes on Highway 108 and cost somewhere in between those two amounts, according to Grossi. He describes it as, “A little bit different configuration. We call it a High T- Intersection design, whereby westbound traffic would not need to stop, and they would be separated from the flow of traffic, from people making left turns and whatnot.”

Grossi says these are just the beginning planning stages, with the next round hopefully involving input from the CHP and trucking industry officials on all of the design alternatives. Caltrans has stated it wants to begin construction in two years.