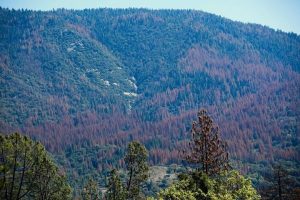 Sonora, CA – Aircraft are flying across thousands of miles of Pacific Gas and Electric Company (PG&E) service area to help with fire detection.

This is the sixth year for the aerial patrols that assist the U.S. Forest Service, CAL Fire and local fire agencies by spotting smoke and better pinpoint a fire’s location from above, allow for a faster respond time.

“Given the continued and growing threat of extreme weather and wildfires, we are committed to further reduce wildfire risks and help keep our customers and the communities we serve safe. Early detection with these patrols can give first responders the critical window of time to quickly contain wildfires,” said Sumeet Singh, PG&E vice president of the Community Wildfire Safety Program.

Seven fixed-wing planes fly daily routes from late afternoon until dusk, the time of day when wildfires are most likely to start, according to fire officials. The patrols are slated to run until October 31, but depending upon conditions may stay in the skies for longer.

PG&E provides these routes for the fire spotting flights:

The utility boast that the patrols have been successful, noting that last year a total of 209 fires were detected and 10 of those were the first report of the blaze. The patrols also totaled more than 5,200 flight hours. PG&E relays that even with the heavy rains and abundant snow pack, it is continuing the patrols due to the scale of tree mortality and the significant increase of fire risk in California.