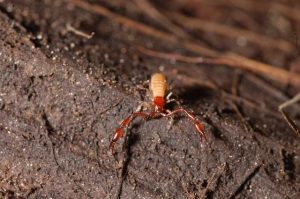 Yosemite Valley, CA– Biologist at Yosemite National Park have discovered a new species of pseudoscorpian in the talus caves. These caves were created by the talus slopes, rocks that have fallen and continue to fall from the 3,000 foot granite walls that line the rim of Yosemite Valley. The talus slopes help park officials learn about rockfall activity and have also been found to be habitat for a new species of arachnid.

A pseudoscorpian is a small arachnid that resembles a true scorpion, but does not have a stinger or a tail. The tiny arachnid, about the size of a fingernail, was found deep in passageways, among granite sand and granite rocks and is believed to prey upon mites, flies, small spiders, beetles and ants.

“More than anything it was just an interesting discovery,” said Yosemite Park Spokesperson, Scott Gediman. “Quite often we feel that we know every plant and animal that exists here. When we have a discovery like this, it’s just real exciting.”

Ongoing research on the Yosemite Cave Pseudoscorpian is being conducted to further understand this new species. Biologists in Yosemite have made it a top priority to continue further research into the talus cave ecoysystem and to learn more about these relatively unexplored areas.