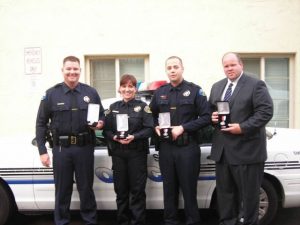 Sonora, CA– Four Sonora Police Officers were honored for their exceptional service to the Police Department and the community last night before the Sonora City Council.

Officers Ryan Webb, Jaemie Boeding, Andrew Theodore and John Mager were presented with the Department’s Lifesaving Commendation. According to Sonora Police Chief Mark Stinson, during the past year and a half, each of these officers performed an exceptional act of heroism which resulted in three people surviving a tragic situation.

Officers John Mager and Jaemie Boeding responded to a medical aid call on Linoberg Steet April 1st. They discovered a 56 year old resident who was not breathing and did not have a pulse. That’s when CPR was performed and the woman resumed breathing on her own. Officer Mager and officer Boeding continued to provide aid for the woman until medical services arrived.

On June 11th, Officer Ryan Webb responded to a medical aid call for an attempted suicide on South Stewart Street. Upon Officer Webb’s arrival, he found a 25 year old woman who was unconscious on a sofa, was not breathing and did not have a pulse. After moving the woman’s body to the floor, Officer Webb asked for assistance from the woman’s father to help him conduct CPR. Officer Webb showed the father how to perform rescue breathing, while he began chest compressions. Officer Webb and the woman’s father were able to revive the woman to the point where she regained a pulse.

Officer Andrew Theodore also responded to a medical aid call.  This time the call was on Cottage Court for a report of a toddler who had fallen down a stairway. When Officer Theodore’s arrived, he determined that the child had also received severe head trauma, was not breathing and did not have a pulse. Officer Theodore notified dispatch and then immediately started CPR. Theodore was able to revive the child to the point where the child started breathing on its own.

Sonora Police Chief Mark Stinson said, “The knowledge of lifesaving techniques , along with the swift actions demonstrated by these four fine officers certainly contributed to these three individuals survival. The officer’s dedication to the job and to the community in which they serve brings great credit upon them, the City of Sonora, and the law enforcement profession.”