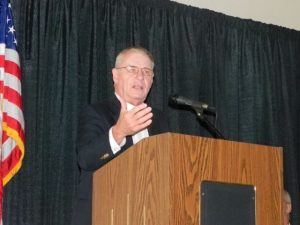 
The event was again hosted by Senator Dave Cogdill and Assemblyman Tom Berryhill. The keynote speaker was Dr. Patrick J. Michaels of the conservative Cato Institute, who is also a Distinguished Senior Fellow at the School of Public Policy at George Mason University. Dr. Michaels spoke negatively about the state’s AB 32 greenhouse gas emission standards and raised questions about many of the theories surrounding climate change. “You have one group of people saying it’s the end of the world and you have one group of people saying there’s no such thing, and the truth of the matter lies somewhere in between,” says Dr. Michaels.

Dr. Michaels also did impressions and made jokes at the expense of former Vice President Al Gore, and questioned much of the science he spoke about in his film “An Inconvenient Truth.”

Mark Rey, an undersecretary in the George W. Bush administration, spoke about the Healthy Forest Initiative that was signed in 2003. It was designed to reduce the risk of fire by thinning undergrowth and brush in forested areas. “Because the initiative was born in the spirit of bipartisan cooperation with Democrat and Republican members participating, and I think the current administration is carrying forward with the initiative because it is necessary, and was carried forward with a great deal of bipartisan support.”

Senator Dave Cogdill was given a plaque by TuCare President Chris Conrad and Executive Director Melinda Fleming for his commitment to the event over the past 10 years. Cogdill is retiring from the Senate, but Assemblyman Tom Berryhill said at the summit that he is committed to seeing it move forward, if elected to Cogdill’s District 14 seat in November. Incoming 25th District Assemblywoman Kristin Olsen was also on hand for the summit, and spoke highly of the event afterwards.