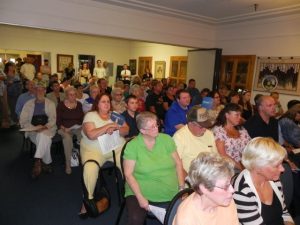 Sonora, CA — A decision on how to move forward with the proposed Sonora Walmart expansion has been delayed by 30 days.

Last night the City Council requested a report on the initiative in hopes of hearing more details about the effects of a potential special election. 12 people spoke in favor of the expansion, which would include the addition of a grocery section onto its current location. Many of the proponents were Walmart employees, while others were community members in support.

Six people spoke against. A group known as the Tuolumne Jobs and Small Business Alliance has been formed and is adamantly against the project.

The requested report will be given to the Council on October 18th.

Also, the City will be moving to a two cart recycling program, similar to Tuolumne County. The Council approved a modified contract with Waste Management last night with a 4-1 vote.

There was a standing room only crowd at the meeting.