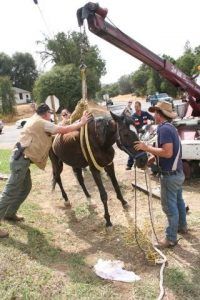 Jamestown, CA — A horse had to be rescued after falling down near the intersection of Highway 108 and 5th Avenue in Jamestown.

According to Tuolumne County Animal Control Manager Jennifer Clarke, the accident happened around 1pm yesterday. The owner, who was riding the horse, said the animal was startled by a horn from a big rig truck, and fell to the ground. The CHP was the first on scene, and learned that the horse was unable to get up. Animal Control arrived and called in a large animal veterinarian from Mono Way Veterinary Hospital, and a tow truck.

Animal Control officers applied a sling to the horse and the tow truck was able to lift him to his feet. The horse was loaded into the Animal Control trailer and transported to the Veterinary hospital. The horse has been seized due to its condition, and remains in the custody of Animal Control. A post-seizure hearing will be scheduled.