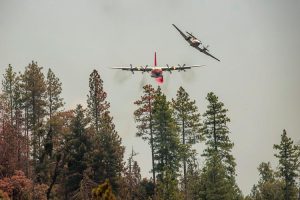 The $213-billion budget was negotiated between Governor Gavin Newsom and legislative leaders this past weekend, and a vote is scheduled for today. Leading Republicans have been critical that it includes a new tax on anyone choosing not to purchase health insurance, and it allows people in the country illegally to apply for low income state funded health insurance.

Related to new funding for fire prevention, it provides $40-million for CAL Fire to purchase 13 new engines and hire 131 people to operate them. $10.6 million will go to hire 34 heavy equipment operators so that all of the agency’s 58 bulldozers can be staffed at a single time. $13.1 million will be spent on maintaining and operating seven C-130 used air tankers being donated by the federal government. In addition, $4.5 million will be spent to hire 13 people to gather intelligence for decision makers at larger wildfires.

Related to clean water, $100-million in new revenue will be allocated to help distressed systems. The state estimates that over a million Californians do not have access to safe drinking water.

$2.4-billion will be spent on homeless and affordable housing efforts. Of that, the state says it will give $650-million to local governments.