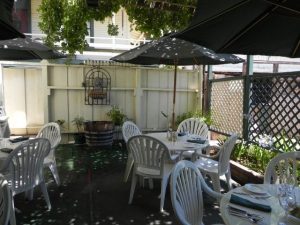 Jamestown, CA-The Mother Lode had a surprise visitor over the weekend.

Jordanian King Abdullah II and his 16-year-old son, Crown Prince Hussein bin Al Abdullah had lunch at the National Hotel in Jamestown Saturday. Preparation began last Tuesday when a group of five men were having lunch out on the restaurant’s patio area. After spending approximately two hours, one of the men asked Restaurant Manager Heather Parkhurst if she could serve a group of 12 Saturday afternoon.

“I said yes, of course we can,” says Parkhurst.

She was then notified that approximately 20 security personnel would be stationed inside the restaurant, and an additional nine outside, but was not told who was coming for lunch.
At around 12:15pm Saturday, the King of Jordan came riding into town on a Harley style motorcycle, and his son followed in a Ford Mustang. They were escorted by Jordanian officials and Secret Service personnel.

“During most of the lunch service, we still didn’t realize it was the King of Jordan,” says Parkhurst. “We knew they were important people and associated with the Royal Court of Jordan, but it wasn’t until the end that we learned that we had the King of Jordan on our patio, and his son, the Crown Prince.”

The King and his entourage were dressed in motorcycle gear, and were very casual. Abdullah II made a similar motorcycle trip across portions of California around two years ago.

“He seemed like a really nice guy,” says Parkhurst.

The King’s choice of food while visiting the Mother Lode: Veal Piccata with no capers.