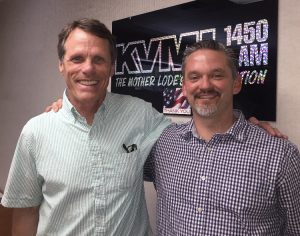 Sonora, CA — Ted Gaines, who is the elected Board of Equalization member for the region, visited Sonora Thursday to get a sense about what is happening in the community.

He tells Clarke Broadcasting that it was for a meeting with the county’s assessor, Kaenan Whitman. “I’m newly elected, and I represent 30 counties, so I thought it would be a good idea to visit the county assessor in each of the counties. Kaenan is number 16, and I have 14 to go.”

Gaines says his goal was to see how things are going in the county, and to find out if there are any services that can be better streamlined.

Sharing his observations, “With some of the entrepreneurial things happening in this community, from the outside looking in, it is very exciting. It’s encouraging to see a growing and vibrant economy that helps people hopefully rise to the middle class. That is really my focus as an elected official. I want to make sure people can live in the state of California and not be overtaxed.”

Gaines notes that he is a big proponent of the long standing Proposition 13, related to property taxes. He is concerned because there is a ballot measure being proposed for next year that would subject commercial buildings to a new assessment, which could double the tax required on many buildings. He feels businesses impacted would then pass along the costs to customers.

In order to keep more residents in this region, he also acknowledges that it is important to address forest management, because if homeowners lose insurance, it could reduce property values.

Also, the state has been moving towards reducing the role of the BOE in recent years, forming a new California Department of Fee Administration and a California Office of Tax Appeals. Gaines says he opposes the idea of eventually phasing out BOE. “We want to make sure that the taxpayers have an elected representative, and a voice, and don’t just have to deal with a bureaucracy.”