No Injuries In Salon Crash 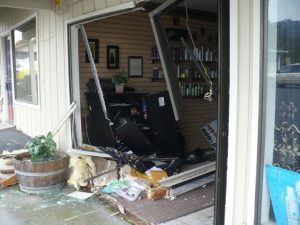 Sonora, CA — No injuries were reported earlier today when a vehicle crashed into the Jazz It Up Salon on Mono Way directly across the street from the Bank of America.

87 year old Margaret Fowler of Sonora had a cut and wash and then left the establishment. She then noticed that she had a pen from the Salon that she had used to write a check.

Fowler was not injured and at the time of the accident nobody was in the Salon.