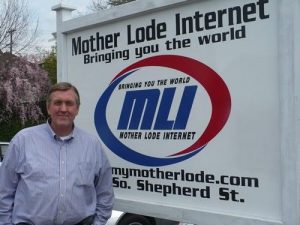 Ben Hulet, CEO and owner of both Motherode Internet and Goldrush Internet has great news for local residents.

Hulet was Friday’s KVML “Newsmaker of the Day”.

According to Hulet, numerous businesses and residential households throughout both Calaveras and Tuolumne Counties have modem connections, which once was adequate several years ago, but not any more.

Broadband is needed for the area to “catch up” to the rest of the nation.

Over the past year, Hulet applied for a Government Grant and was awarded $2.8 million from the State of California, to expand the wireless network. Hulet is now slated to be awarded another $3 million Grant to help further expand that network over a five county area.

Hulet says this should take only about twenty months, with the majority of Motherlode residents noticing faster internet options and better connectivity within the next twelve months.