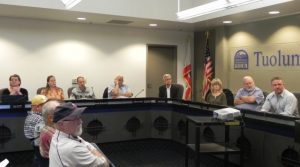 Sonora, CA – Tuolumne Utilities District General Manager Pete Kampa is no longer recommending that the Board of Directors approve the controversial rate increases.

Kampa says given the current economy and outcry at last week’s meeting, he feels the best thing to do is develop a modified proposal. In a memo to the Board of Directors, Kampa says the revised plan would look to reduce the impact on rate payers by finding alternative ways to increase revenues. That includes investigating new ways to cut operating expenses, eliminate three existing positions, reduce the amount of money that funds studies for future projects, put less money into a reserve fund, and eliminate the transfer of funds from the water to the sewer fund.

Kampa says the changes would have a negative impact to the district’s services, and those impacts would have to be analyzed when the revised proposal is completed. For example, he fears that cutting the funding for studies will result in less State and Federal grant dollars. Over the long run, he says this could result in higher rates for customers, because it could delay the construction of water projects. “That’s just a risk that we’ll have to consider,” adds Kampa.

The Board is currently scheduled to vote on the original rate plan at tomorrow’s meeting, which starts at 7pm in the T.U.D. meeting room. Following last week’s public hearing on the rate increases, it appeared the original plan had little chance of gaining enough support of the Board of Directors.  To read the earlier story, click here.