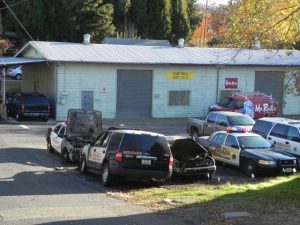 Sonora, CA — More details are being released about the patrol vehicles that were purposely set on fire outside the Tuolumne County Sheriff’s Office Administration building.

Three patrol vehicles were covered with gasoline and lit by an unknown suspect at around 3am. A fourth vehicle, a pickup truck, was also set on fire.

“It is possible that it (pickup truck) was pushed here from around the corner on Oak Street, stolen from there, and rolled to our lot,” says Sgt. Jeff Wilson. “At this time we don’t know if it was on fire when it was pushed into the lot, or set fire after that.”

State and federal agencies have been called in to assist the investigation.

“It is a suspected terrorist crime because it was a violent attack on law enforcement,” adds Sgt. Wilson. “Anytime you have something like that, you have to look at it as possible terrorism.”

There is a security camera outside the Sheriff’s Office, and those tapes are being reviewed to see if there is any evidence that can help the investigation.

Sgt. Wilson notes that there was suspicious activity at the Tuolumne County Courthouse two days ago when a fake bomb was located outside, but at this point he does not know if the two incidents are connected.