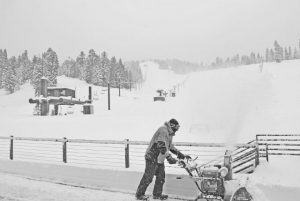 Amber Jenquin at Dodge Ridge is hopeful that this Friday’s storm will be the first of several storms that will bring enough snow to open the resort.

“We are 100% ready to go” Jenquin said. “Once Dodge opens, our staff and facilities will be open for the season seven days a week.”

Communications Manager Jason Smith says Bear Valley has a set date of December 16th.
“We will open regardless, with a combination of man-made and regular snow,” said Smith.

He adds that Bear Valley has recently been participating in several industry trade shows. Smith says there is excitement from people he meets that this will be a good season.

According to the Bear Valley website, they have received 31 inches of total snow from fall and winter storms.  They will need between one to two feet  to open for skiing on weekends. Also, if there is enough snow, Bear Valley will be able to open the Friday after Thanksgiving.