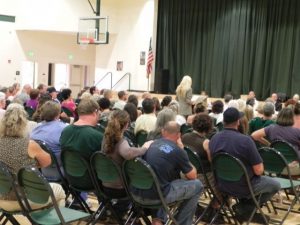 Parents and interested community members had a back-and-forth debate about the employment status of Columbia Elementary Superintendent Dr. John Pendley.

The Board of Trustees held its first meeting Tuesday night since a letter was sent out to parents discussing the crimes committed in 2010 by Dr. Pendley’s 23-year-old son, and former after school aide, Brennan Pendley. The younger Pendley was arrested, and later admitted to having sexual intercourse with a 15-year-old female student on campus.

Around 150 people gathered at the school’s gymnasium. Everyone wishing to speak was given three minutes, and over 20 people took the opportunity to voice their opinion. Around half of the speakers called for Dr. Pendley’s immediate resignation, and the other half praised his leadership and pledged support for him. Members of the audience tended to erupt in applause after each speaker, and based on the noise, Dr. Pendley appeared to have slightly more supporters in attendance than detractors.

Critics were displeased with Dr. Pendley for the way he handled the case. Many cited that they are still “concerned for the safety of the children.”

Dr. Pendley took heat for asking Columbia Elemtary teachers and staff members to write letters to a Superior Court Judge recommending that his son receive a lighter sentence. The younger Pendley is currently serving a year in county jail as part of a plea bargain with The District Attorney’s Office.

Dr. Pendley was also criticized for releasing no information to parents until several months after the crime. However, some of the harshest criticism was related to his son being hired at Belleview Elementary. The younger Pendley had resigned from Columbia in the days immediately after the Sheriff’s Office investigation began, and was quickly hired at the other school. Dr. Pendley, who is also the Superintendent at Belleview, addressed the matter in an interview after the meeting.

“At that point, what we had were accusations about texting, and nothing about sexual misconduct,” says Dr. Pendley. “For those people that think I made a mistake, I can understand their viewpoint. But I did not know of the other things until later.”

The Sheriff’s Office has stated that the investigation started after hearing concerns that an after school aide had been sending inappropriate text messages to the student.

Dr. Pendley claims that his son performed construction work during the summer at Belleview, and did not have any contact with the children. The President of the Belleview School Board, and an additional Board member pledged full support for Dr. Pendley at the meeting.

One of the community members concerned about the handling of the situation is Suzanne Praisler, a Board member for the local Center For a Non-Violent Community (former Mountain Women’s Resource Center). “I feel Dr. Pendley has made some poor decisions, and he should step down,” says Praisler. “This whole thing has put Columbia Elementary in a very poor light, which is unfortunate because it is a great school.”

Praisler hopes that the school will utilize some of the services offered by the Center for a Non-Violent Community in the months ahead. “At one time last year the Center did contact the administration about doing programs, and the Center was turned down,” claims Praisler. “The exact quote was, ‘we don’t want to open this can of worms.’ I came tonight because I feel that ‘the can is open.'”

The School Board gave no comments during the open forum period. At the end of the meeting, Board President Laura Phelan thanked the community for taking time to speak. The Board gave no indication that Dr. Pendley would be removed from his position, and he appears to still have their support.