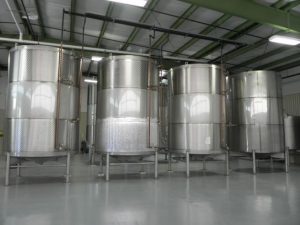 Sonora, CA – Despite a downturn in the national economy, some business activity is picking up across the Mother Lode.

Indigeny Reserve, 160 acre working organic apple ranch, ciderworks and distillery is set to open this fall. Founders Jay and Judy Watson gave a group of government and business leaders a sneak peak on Friday. The company will make products like hard apple cider and brandy, and hopes to move around two million bottles a year from its site in the Apple Valley Region of Sonora, off Lyons Bald Mountain Road. Owner Jay Watson says the company is committed to organic farming practices, conservation and preservation. They also plan to open an onsite tasting room in September or October. The property will be family-friendly and incorporate aspects of eco-tourism.

As reported last week, Sierra Pacific Industries plans to open the Standard Mill sometime within the next week. 70 employees have been hired for the first shift and an additional 70 could be hired later this summer. The company has all the equipment in place and is finalizing the permit process with Tuolumne County.

Accounting firm E. Samuel Wheeler, CPA is expanding and has brought in a business partner. The company was founded by Wheeler in 1988, and now combines the services of Kimberly A. Egger. Wheeler states, “We pride ourselves in the lasting relationships we develop with our clients and the partnership enhances our commitment to the Mother Lode communities we serve.” The company is now called Wheeler & Egger CPAs, LLP.

Construction is well underway on a gas station/convience store in the south parking lot of Black Oak Casino. It will open later this year. Meanwhile, Casino General Manager Ron Patel says groundbreaking for the future hotel at the casino should also be sometime later this year.

Speaking of service stations, a sign is up at the Standard Center indicating that the ARCO AM/PM station is coming soon. California Gold Development Corporation is overseeing construction.

Mark Twain St. Joseph’s Hospital broke ground last week on a new MRI facility. The “fixed-site” Magnetic Resonance Imaging (MRI) system will be located on the hospital’s campus in San Andreas. The new building is currently being manufactured and will be delivered to the campus on July 7th.