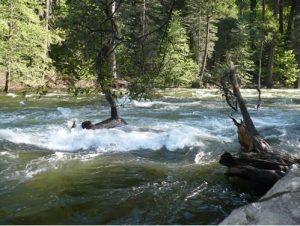 A Flood Warning remains in effect for the Merced River at Pohono Bridge until further notice.

According to the National Weather Service, the warmest temperatures of the snowmelt season are expected over the next several days. This is causing the Merced  River at Pohono Bridge to reach flood stage.

This will bring flooding to campgrounds and trails in Yosemite Valley and visitors should pay close attention to Park officials for any closures.

Additionally a Flood Watch remains in effect for the Sierra Nevada through at least the end of the week.

Rafters and recreationalists will need to stay alert and be aware that all rivers and streams are becoming increasingly hazardous as the fast flowing and very cold waters continue to rise. Hypothermia is a deadly possibility.

Boaters on area lakes should be alert to floating debris, such as branches and logs that have washed into the lakes from high waters upstream.