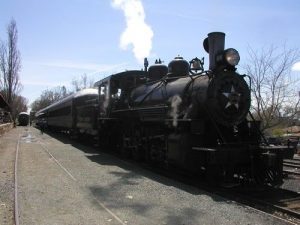 Alden Olmsted has organized a grassroots bucket campaign that he believes will save the seventy California State Parks, including Railtown 1897, that are slated for closure by July 2012.

Olmsted was Thursday’s KVML “Newsmaker of the Day”.

Olmsted, son of the late John Olmsted (who created several California State Parks) has a simple, yet large vision for keeping the state parks open.

“In theory, if every single person in California simply gave $1, we would raise anywhere from 33 to 38 million dollars,” said Olmsted, “It only takes eleven million to save the parks for one year, but we can show Sacramento that we care about keeping these parks open well beyond a year.” said Olmsted.

Last week Olmsted set out from his home in Nevada City, CA and began driving, with the intent to personally visit every state park that is scheduled to be closed.

He has seventy buckets that feature his father’s face. Olmsted is dropping off one bucket at each state park. The buckets urge visitors to voluntarily drop one dollar into it.

Olmsted has covered most of northern California and is just now beginning to visit parks in central and southern California. He estimates that he will be at Railtown 1897 next weekend.

Additionally, Olmsted has set up a donation webpage at http://www.johnolmsted.net

When asked if his vision has been approved of in Sacramento, Olmsted said, “I have heard that if we can raise a significant amount of money, then I will be able to personally meet with Governor Brown to discuss this. My father worked with Jerry (Gov. Brown) in the seventies, so I am confident that we can get this done.”

Olmsted refuses to believe that Californians will not be willing to save the state parks through this unique $1 per person effort.

“My Dad was considered crazy by the naysayers, but he had a vision,” Olmsted said, “He got things done. He created several parks. I know my current vision is considered crazy. But together we can save these parks.”