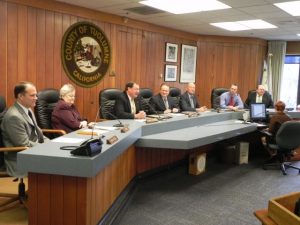 Sonora, CA —  The Tuolumne County Supervisors met today to decide on a plan calling for the coordination of land use decisions between county, state and federal agencies.

In Plan A from 2009, many argued that an 80 page document submitted by Supervisor Teri Murrison was the best direction for the county, while others argued that it went too far. Some argued last year for the county to use a 20 page coordination plan put together by Community Development Director Bev Shane and county staff members, while others felt it was too watered down to be effective.

Today former Tuolumne County Supervisor Teri Murrison said, “The goal that we set out to accomplish with Plan C is to bring some balance and to see the goals of protecting the environment and protecting our communities on equal footing.”

There were also several members of the public who spoke in favor of the latest revision, Plan C,  including Tuolumne County Chamber of Commerce President George Segarini and TuCare’s Executive Director Melinda Fleming. There was no public opposition to any of the proposed plans.

The board voted 4-1 to approve Plan C that combines the two previous competing plans. Supervisor Liz Bass was the lone dissenting vote.