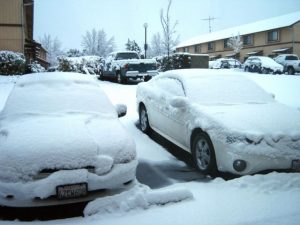 Sonora, CA — The Weather has caused some traffic hazards in the Mother Lode this morning.

Earlier today the CHP had reports of cars getting stuck on Tuolumne Road near Woodham Carne Road. A plow has now passed through the area. A truck is causing a traffic hazard on Highway 108 near Bald Mountain Heliport Road. Some vehicles reportedly became stuck overnight on Iroquois Lane near Sierra Parkway in Calaveras County and continue to be a traffic hazard this morning. A car also became stuck overnight on Manzanita Drive at Hillcrest Drive, and it remains stuck.

There are also reports of downed tree branches across the region.