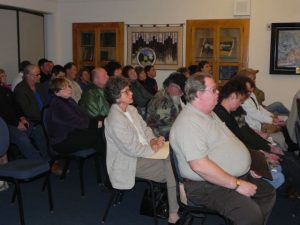 Sonora, CA — For nearly two hours last night the Sonora City Council debated whether to apply for a State Transportation Planning grant designed to find ways to improve parking and beautify areas like the downtown region.

At the beginning of the meeting, Mayor Bill Canning and Councilman Matt Hawkins said they supported the proposal, while Council members Hank Russell and Ron Stearn said they would vote no because of the staff time it would take to submit the application. Councilman Dave Sheppard was absent.

Staff hours would also be used as a 10 percent match required per the funding request, equaling around 40 city hours. Staff time would also be donated by the Tuolumne County Transportation Council. Russell and Stearn argued that it was not in the best interest of the city to use staff time for a study.

A dozen business owners and residents then came up and spoke in favor of the grant request, and no one spoke against. The downtown business owners argued that Sonora needs help during the down economic times to attract tourists and keep its younger population. They also argued that the state has already set aside $3 million statewide for these planning grants, and if Sonora doesn’t apply it will go to neighboring areas like Amador County. They stated that Sonora needs infrastructure improvements in order to compete in the region.

It was also pointed out that in order to receive state and federal funding for improvement projects in the future, studies are required to show that the projects benefit the community. Without the studies, there will be no funding. When the final roll call was taken, Russell and Stearn flipped their votes, so it passed 4-0.

Sonora will now be eligible to receive up to $250,000 for transportation planning.