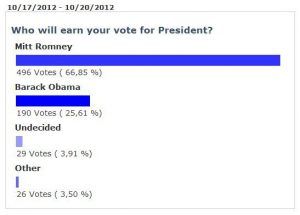 After two days of a myMotherLode poll being posted Mitt Romney leads 496 votes to 190. The 66.85% for Presidential hopeful Romney nearly matched the poll taken in April. Between April 5th and the 10th the myMotherLode poll asked, “If the election were today, who would you vote for?” There was no ‘other’ or ‘undecided’ category. Over 900 votes said Romney, or 66.97%. President Obama had 33% of the votes in that poll and 25.61% in the most recent poll with 3.9% undecided and 3.5% voting other.

Before the Primaries a poll question asked “If all five of these names appeared on the presidential ballot, who would you vote for?” Obama had a slightly lower 24% lead as in the poll this week. The rest of the votes were divided among the four republican nominees with Romney at nearly 18% of the 63%. In that poll 12% voted for None of the above. The most recent polls are posted here.

A Reuters daily online tracking poll of likely voters released today found Obama and Romney were each supported by 46 percent of the electorate. Romney trailed by 1 percentage point when the poll was last published on Saturday. According to Reuters the two candidates have remained within three percentage points of each other since shortly after their first debate on October 3.

The third and final Presidential debate between President Obama and Governor Romney will be broadcast on KVML 1450AM at 6:00pm. The focus of the debate will be foreign policy.