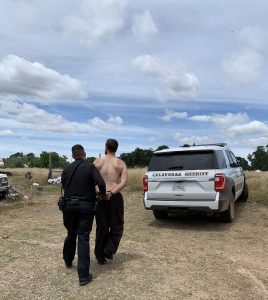 Deputies recognized the driver when he slipped out the passenger side and took off running as 35-year-old Johnny Sullivan of San Andreas. They quickly set up a perimeter and called for additional units that responded from the sheriff’s office, CHP, Angels Camp Police Department K-9, and CAL Fire.

Once deployed, the Angels Camp Police K-9 tracked Sullivan to a nearby residence, where he was eventually located and taken into custody without further incident. A vehicle search yielded drug paraphernalia in the form of pipes and hypodermic needles along with a usable amount of methamphetamine.

Sullivan was arrested and transported to the county jail. In addition to the outstanding felony warrant, he faces fresh felony charges of resisting arrest and unlawful entry into a residence along with possession of meth and drug paraphernalia. He is being held without bail.