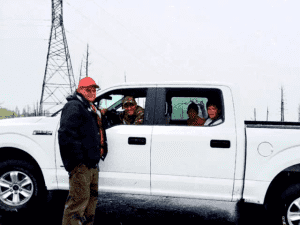 According to sheriff’s spokesperson Sgt. Andrea Benson, her office received an early Sunday morning call from a man named Bradley, who along with his two sons, ages ten and seven, departed Ripon Saturday morning to scope out a campsite at Cherry Lake. The trio failed to return home by 7 p.m., as intended and dispatch received a call a little after midnight from his wife, who reported them missing.

Although deputies searched the area and their intended route, they were unable to locate the missing family members and called in the Tuolumne County Sheriff’s Search and Rescue Team.

It was around 8 o’clock Sunday morning that Bradley, who had hiked to the nearest ranger station, called the sheriff’s office to report that his vehicle had become stuck on Forest Road 1N86 near Cherry Lake and his boys were still inside it. Search and rescue members responding to the area located the father and sons in the truck and saw the many parts of the road covered with heavy snow.

After helping the man free his vehicle, responders followed him out to the Groveland side of Cherry Lake to make sure the family was safe on its way home.

Benson recounts that the trio had taken food and water for only one day and slept in the vehicle overnight until the dad was able to hike out for help Sunday morning. She adds that the family was healthy and did not sustain any injuries.

“We recommend that anytime you plan to recreate in the outdoors, research the terrain and the weather forecast for the area you are traveling through,” Benson advises. “Storms in the high country can be unpredictable and the weekend forecast included rain and snow in higher elevations. When you have to travel in inclement weather remember to bring extra food, water, clothing, and blankets in case of emergencies,” she continues. “Always tell someone where you plan on going and when you intend to return as was done in this case, which enables law enforcement and search and rescue teams to have a starting point to work from to get to you quickly.”