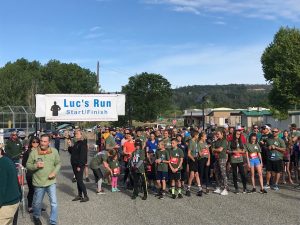 The event was held Saturday morning under sunny skies in downtown Tuolumne. There were 292 runners on hand (85 more than last year), and 276 virtual runners that took part from all over the world. US Air Force families participated at bases as far as away as Aviano in Italy, Spangdahlem in Germany, Osan in South Korea, Kunsan in South Korea and Misawa in Japan. 28 states were also represented by virtual participants.

Luc’s brother, Alex Gruenther, reports that over $30,000 was raised this year for scholarships.

The Major Lucas Gruenther Legacy Foundation awards scholarships in three categories. The first is for someone who is pursuing a passion outside of the traditional education realm, such as photography, culinary skills or film school. Gruenther himself was a skilled photographer and some of his work was available as part of the event’s silent auction. Another scholarship is for individuals who have lost a family member serving in the US armed forces, and the third is for a Summerville High student that emulates Luc’s spirit and tenacity in life.

Major Gruenther, a Tuolumne County native, and F-16 Flight Lead, died in January of 2013 during a training mission over the Adriatic Ocean in Italy. During the opening ceremonies his mother Romel, and widow Cassy, spoke about his legacy.  The VFW color guard was on hand, and the Summerville High School Jazz @8 performed the National Anthem.

In addition, there were over 40 volunteers that helped on Saturday morning, directing runners, manning aid stations, helping with registrations and running Luc’s store. The Sonora Sunrise Rotary Club oversaw the official timing.

The event also featured a kids run for anyone under 10, in which Luc’s daughter Serene took part.

The 2020 event has already been scheduled for Saturday, May 16. For more information on the Major Lucas Gruenther Legacy Foundation, click here.