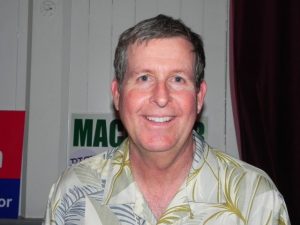 Michael “Mick” Macomber says he accepted a job this week with the Kettering Health Network based in Dayton, Ohio. Macomber will manage real estate for the seven hospital system, and advise on legal matters. Macomber notes that his wife will also have an opportunity to teach art at a school in Ohio. He says the opportunities fell into place unexpectedly, but his family felt it was something they could not turn down.

“I want to thank everyone that I have met during the campaign and those that have supported me,” says Macomber. “It has been a very positive experience.”

Macomber says he has not given any serious thought as to whether he will endorse one of the remaining candidates. They include Jason Frye, Jim O’Neil, Karl Rodefer and Domenic Torchia.

Macomber’s name will still be on the ballot, but he is officially ending his campaign. The primary election is coming up on June 5.