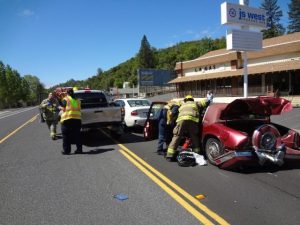 The Sonora Police Department reports that it happened at 11:10am along Stockton Road near the J.S. West building. The SPD says that vehicles were stopped in traffic because CALTRANS was doing some road maintenance. A Chrysler Town and Country van driven by Arlene Sprague crashed into the rear of a vehicle, causing a chain reaction of other fender benders. The Police Department reports that Sprague was traveling at around 30 mph. Other vehicles involved included a Toyota pickup truck driven by Nola Pettitt, a Cadillac Eldorado driven by Irene Garcia, and a Subaru Legacy driven by Bryan Payne.

All of the vehicles involved had major damage. Traffic was slow-and-go for about a half-an-hour.