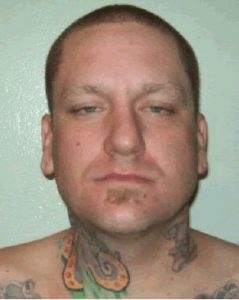 Sunday morning, April 1st at about 2:20 am, Tuolumne County Sheriff’s Dispatch received a call regarding two or three gunshots heard near the Columbia Motel.

When Deputies arrived they searched the area but did not find anyone injured. While searching, Deputy Paul Speers found what appeared to be a .45 caliber cartridge casing in a drainage ditch in front of room #44.

Around this time Deputies noticed a man later identified as 31 year old Sean O’Connor of Columbia, watching them from a window in the same room. O’Connor said that he heard the gunshots but told the Deputies the sound came from an adjacent field.

O’Connor and his wife, 30 year old Lisa O’Connor, both consented to a search of their room.

Inside of the room Deputies found eight handguns, several of them stolen, $620 in cash, 19.7 grams of tar heroin, hypodermic needles, scales, packaging materials and other paraphernalia consistent with drug sales.

The O’Connors were arrested and booked at Tuolumne County Jail.

Both were arrested about two weeks ago on charges of possession for sales, paraphernalia and stolen property, but had been released on their own recognizance pending trial. They are now facing at least five felony charges and several misdemeanors.