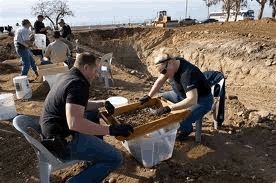 Linden, CA — Remains found in an old well on a Linden property believed to be victims of the “Speed Freak Killers” Wesley Shermantine and Loren Herzog.

The search of a 1800’s well has turned up 1,000 bone fragments as of this afternoon. Deputy Les Garcia, a spokesman for the San Joaquin County Sheriff’s Office reported that as of 2:30pm today investigators have reached the bottom of the well. According to the property owner, the well was sealed and filled with dirt in the mid to late 80’s.

In addition to the bone fragments, Deputy Garca said they found coats, shoes and a woman’s ring that may aid in identifying the victims. Deputy Garcia noted that the well was filled with debris in the layer above the bones which included car parts and a washing machine. The California Department of Justice is leading the efforts to sift all the dirt removed from the well. The investigation and identification of the remains is on going and could take weeks.

The next location to be searched has not been announced, but could be another well located East of this well.

The San Joaquin Sheriff’s Office has set up a hotline (209) 468-5087 that has received more than 50 calls from people who believe a missing relative might be among the remains yet to be identified. Deputy Garcia encouraged people with missing persons reported before 2000 who could be victims of Shermintine or Herzog to call or email coldcase@sjgov.org.

Bones found last week at a different property, 33 miles East in San Andreas, have been tentatively identified as Cyndi Vanderheiden and Chevelle “Chevy” Wheeler. Both families of the women have been notified. According to Garcia investigators have completed their search of that property.

Shermintine and Herzog were known to brag about killing as many as 20 people in the 1980s and 90s. Herzog recently committed suicide while out on parole.