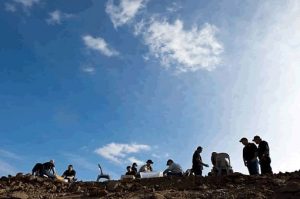 Linden, CA — After being rained out on Monday, officials are continuing to search property in Linden that was once owned by the Shermantine family.

The bones of two women found last week at a different property in San Andreas have been tentatively identified as Cyndi Vanderheiden and Chevelle “Chevy” Wheeler.

The San Joaquin Sheriff’s Office has spoken with the parents of both Vanderheiden, a 25-year-old Clements woman who disappeared in 1998, and Chevelle “Chevy” Wheeler, who vanished from Stockton in 1985.

Deputy Les Garcia, a spokesman for the San Joaquin County Sheriff’s Office says, “We’ve finished our searching efforts there in Calaveras County. We are currently focused here, at a well in Linden California, where we continue to locate remains in an old abandoned well.”

Over 300 human bones were found in the well near Linden over the weekend. Garcia said after they finish with the well they will search a second well nearby.

San Joaquin Sheriff’s Office has also set up a hot line (209) 468-5087 that has received 50 calls from people who believe a missing relative might be among the remains yet to be identified. Deputy Garcia encouraged people with missing persons reported before 2000 who could be victims of Shermintine or Herzog to call or email coldcase@sjgov.org.

Serial killers Wesley Shermantine and Loren Herzog were convicted in 2001 of murdering Vanderheiden and two other men found in a car on Roberts Island. Both bragged of killing, but there has not been enough evidence to connect them to murders that they were suspected of in Utah, Nevada and California. Shermantine was also convicted of murdering Wheeler and is serving a life sentence at San Quentin State Prison for the four murders.

Shermantine claims the unidentified remains were individuals killed by Herzog. Herzog’s 78 year sentence was reduced to 14 by an appeals court that ruled his confession was illegally coerced. Herzog committed suicide last month while on parole.