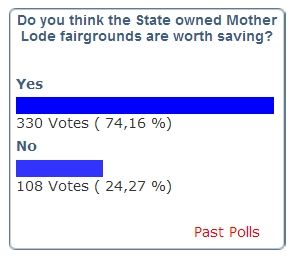 Sonora, CA – Results of a brief and informal myMotherLode.com poll show that readers are divided about expanding the Transient Occupancy Tax (TOT) to fund Railtown and the Fairgrounds. The results of the poll were 51% in favor and 47% opposed.

The Tuolumne County Board of Supervisors voted 5-0 to direct county staff to draft a proposal to expand the tax so that there will be funding available for Railtown and the Fairgrounds. The proposal would be on the ballot in the upcoming June election. Expanding the TOT to include campgrounds, house boats and RV parks would bring the county an estimated $350,000 a year. Railtown currently needs around $200,000 to maintain a modified year round operation, and the Fairgrounds require an additional $125,000 a year. For more read “Expansion Plan Moves Forward”

Objection to TOT expansion in reader comments include frustration that taxes are already too high, and worry that the tax will discourage or punish tourists. In support, many places that will be collecting the tax would receive less business if the parks close.

Governor Jerry Brown passed a bill last April that cut $11 million from the parks budget in the fiscal year beginning July 1, 2011 and $22 million more is to be cut by April 2012. For more on the Railtown closure, review the initial announcement “Railtown 1897 Proposed To Close” by MML Reporter Tina Falco.

The current myMotherLode.com poll asks, “Do you think the state owned Mother Lode fairgrounds are worth saving?” The results are 3 to 1 in favor.