Little Sweden Building Is Torn Down 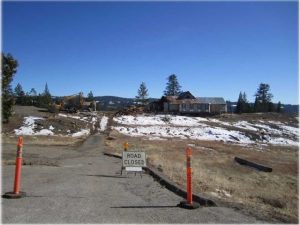 Little Sweden, CA — The abandoned and condemned building at Little Sweden is being torn down by Tuolumne County. The site was a popular commercial sledding area at one time, and many still decide to sled there despite the fact that it is closed.

According to Deputy County Council Carlyn Drivdahl, it is being demolished as part of a “summary abatement.”  Drivdahl noted that the side of the building was “ripped off”.  “With all the debris and hazards associated with that, the structure was determined to be an imminent threat to public safety.” Drivdahl said that people were there last weekend playing in the snow.

Much of the area along Highway 108 has posted “no parking” signs, and each year CHP officers write tickets and can tow cars parked in that area. Last year, over the New Year’s weekend, CHP officers wrote 27 parking tickets at Little Sweden.

The U.S. Forest Service manages about a quarter of the area used by sledders. The rest of the land is private property owned by Don Williams.

For photos documenting the delapidated state of the building visit http://www.artificialowl.net/2009/08/little-sweden-abandoned-bar-restaurant.html