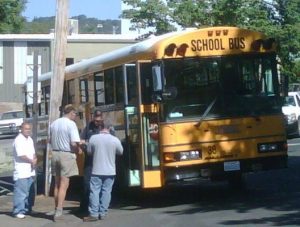 Local schools are relieved after state lawmakers changed their minds and decided not to target school bus service in a midyear cut to education.

Both houses of the California State Legislature approved SB81 and Gov. Jerry Brown is expected to sign it into law. SB81 will alter a $248 million school transportation spending cut to apply as a budget reduction per student.

For Calaveras the midyear budget “trigger cuts” meant that half of their school bus transportation budget would have been cut. According to Calaveras Union Schools Superintendent Mark Campbell, they were looking at cutting $685,000 from his district’s budget.  Campbell estimates that they will only need to cut $138,600 now. This would give the school an additional $546,000. Campbell stated, “It has a tremendous impact on Calaveras Union School District.”He also noted, “We will see what that does next year when we are looking at loosing all of our transportation budget.”

Tuolumne County Superintendent of Schools Joe Silva also hopes that the bill is signed soon he said that, “I get the feeling from the other [school superintendents] that they are very relieved.”

Silva noted that before this passed there were plans for consolidation of several bus routes and now he doesn’t believe that they will be doing “anything with transportation cuts at this time.”