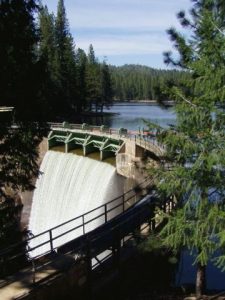 Sonora, CA — T.U.D General Manager Pete Kampa says this winter season is shaping up to be even worse than the driest year on record, 1977. By the end of January in 1977, the Sonora area had received a total rainfall accumulation of 5.9 inches. According to TUD, from October thru January, the Sonora area has received a total of 3.2 inches of accumulated rainfall. Normal rainfall for this time of year is 17 inches.

According to Kampa the National Oceanic and Atmospheric Administration (NOAA) doesn’t expect this weather pattern to change until March. The Department of Water Resources declared this year a critically dry year. Kampa said PG&E has been helpful and is extremely concerned. The declaration allows PG&E’s hydroelectric dams, usually operating at maximum flow in the winter, to further reduce outflow from 20 cubic feet to 5. This will reserve as much water in Pinecrest as possible.

Eric Hall, District Water Master, states, “Due to the current dry weather conditions most water flushing has been suspended.” The annual flushing is usually done in the winter to clear out any sediment or minerals that may accumulate in the pipes during the summer. Hall’s crews are also constantly walking all 57 miles of the ditch system to check for leaks and ensure all water is being stored where it can. Hall encourages all customers to notify the District if they notice a leak in the system whether it’s a home, business or the ditch.

The New Melones and Don Pedro Reservoirs have above average water storage, which is why the state has said that there is plenty of stored water available. Kampa states “Unfortunately, the reservoirs owned by PG & E which serve TUD are much smaller.” Kampa says that they prefer Lyons Dam to hold a full 5,500 acre feet and stay above 1,200 acre feet. The lake is currently at 2,000 and Kampa expects it to be down to 1,500 acre feet by the end of January.

Kampa concludes, “The District will continue to monitor the lake levels at Pinecrest and Lyons Reservoirs to better estimate if and when water conservation from our customers is needed.”

The T.U.D. Board of Directors will vote at a future meeting whether to request emergency conservation measures.