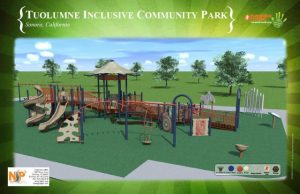 Sonora, CA — Plans for a universally accessible playground to be built in Tuolumne received the endorsement of the county Board of Supervisors.

We did a story about the group Big Dreams-Universally Accessible Parks and Playgrounds back in April. Click here to view the story describing their history and future plans.

The group wants to construct a playground that is accessible for residents with disabilities next to the Tuolumne Memorial Hall. They are organizing fundraisers, and also plan to request grant funding to raise the estimated $325K needed for the project.

The Board of Supervisors voted 5-0 this morning to allow the park to be constructed on the county property. Currently the parcel has old playground equipment that is in need of repair. The county has partnered with other organizations in the past when it comes to non-profit groups raising money for parks on county land. These have included the Jamestown Jail project, the Heaven for Kids Park near the Main Library, and the Rotary Club’s Dog Park and Community Garden.

This week the project also received the endorsement of the county’s Historic Preservation Commission. It was reviewed because it would be near a historic structure, the Tuolumne Memorial Hall.