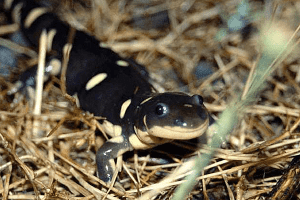 Sonora, CA — Plans for a large solar project off O’Byrnes Ferry Road will proceed while watching for the California Tiger Salamander. The Tuolumne County Board of Supervisors voted 5-0 to allow construction to begin.

The vote amended the conditional use permit that called for a negative impact study. The negative impact study revealed that the project takes place on the outer fringe of what has been designated by State and Federal authorities as endangered California Tiger Salamander habitat.

The Board of Supervisors voted to allow the project to proceed with the condition that they follow the California Department of Fish and Game and United States Fish and Wildlife Service laws. Those laws go into effect if any evidence of the salamander is found during construction.

Local assessment of the Solar project site by herpetologists in May found no evidence of the Salamander, and no evidence in ten nearby ponds. The nearest known California Tiger Salamander, which can travel up to 1.24 miles, was found 15-20 miles from the construction site. The meeting was open to the public but no comments were made opposing the project.

The initial assessment was performed in May, it would take two years to do a full assessment.

PG&E has set a July 15th deadline to complete the project. The project falls under California’s Conservation Act, better known as the Williamson Act. Through a special use easement the energy can be produced on land originally designated for agriculture.

The company Ecoplexus plans to install 5,976 photovoltaic solar panels over 14 acres of land. The property, owned by T-5 Ranches, is located on the north side of O’Byrnes Ferry Road, directly east of the Sierra Conservation Center. The solar array would be 450 ft. off the roadway.