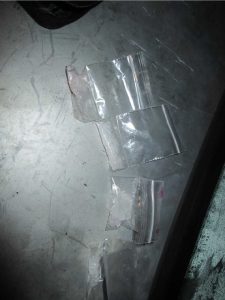 Jamestown, CA – A Honda Civic pulled over in Jamestown landed two in handcuffs after baggies full of drugs are discovered inside the sedan.

An unreadable license plate caught the eye of a Tuolumne County Sheriff’s Deputy traveling on Wigwam Road around 12:30 a.m. on Thursday and he made a traffic stop. Behind the wheel was 30-year-old John Evans of Jamestown and his passenger, 42-year-old Jamie Gogna of Angels Camp. A records check revealed Evans had an expired driver’s license and a warrant for resisting arrest.

The deputy questioned whether the pair had anything illegal on them or in the vehicle, Gogna admitted to having drug paraphernalia and methamphetamine. During a vehicle search, over ten grams of meth was found in individual plastic baggies. The deputy also uncovered cash and drug paraphernalia inside the car.

Both were taken into custody without incident. Evans was booked for driving without a license along with his warrant.  Gogna faces several felony charges, including transportation and sales of drugs.

Of note, Evans was also arrested this same month back in 2015 for stealing copper wiring after cutting a large section of an AT&T phone line resulting in $65,000 worth of damage, as reported here.