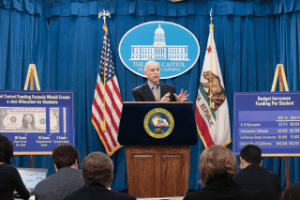 Sacramento, CA – Just released today, the Governor’s revised budget plan includes less spending except when it comes to schools. Despite soaring state tax revenue, the plan has $1.2 billion less spending for the coming fiscal year than Brown projected in January. Brown’s Office says actions by the federal government are at least partly responsible. They say the forecast for growth of personal income is lower because the federal government did not extend a 2 percent payroll tax reduction. That reduced the projections for personal income growth for the coming year in half, to 2.2 percent.
Brown says, “There are a lot of needs out there and there’s very articulate advocates and I’m trying to find the right balance between spending and holding the line.”
The Governor’s office reports the revised budget plan lowers the state’s debt to $4.7 billion by 2017 which is a reduction of over 86 percent. They say that was achieved through billions of dollars in permanent cuts in the 2011-12 and 2012-13 budgets as well as temporary revenues passed by voters last year.


“This budget builds a solid foundation for California’s future by investing in our schools, continuing to pay down our debts and establishing a prudent reserve,” said Governor Brown. “But California’s fiscal stability will be short-lived unless we continue to exercise the discipline that got us out of the mess we inherited.”

The revised budget also has $240 million in first-year funding for the Governor’s Local Control Funding Formula (LCFF), for a total of $1.9 billion. Brown’s Office says the funding is based on the number of students served, directs additional resources to the state’s neediest students and restores local control over how money is spent in schools.

Below are additional revisions to the budget outlined in the Governor’s plans:

• A state-based approach to the optional expansion of subsidized medical care allowed under federal law.
• A revenue-neutral revamping of the state’s enterprise zone and hiring credit programs to encourage manufacturing investment and increase employment in high-poverty areas.
• An additional $48 million in CalWORKs job training and subsidized employment opportunities.
• To maintain a $500 million increase to the University of California and California State University systems with additional increases in each of the next four years to make higher education more affordable, more efficient and to maintain quality.