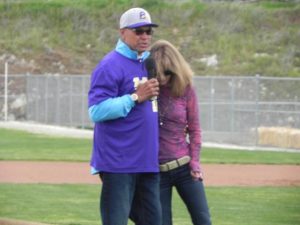 Angels Camp, CA — It was an emotional day, as Hall of Fame Baseball player Reggie Jackson was at Bret Harte high school hosting the “Play it Forward” fund raising event and baseball game. Reggie flew in from Tampa, Florida he was asked to participate by Seanie Marshall in the first home game in the number 15 team jersey of her son Alex Marshall.

Alex Marshall, 17, and his sister, Macaila Marshall, 14, both attended Bret Harte High School. Seanie said her son needed a stand in for her son’s position and wanted to do something out of appreciation for the support that was felt from the community after the deaths of her two children.

Reggie Jackson, 66, long time friend of the family stepped up to address the crowd and thanked everyone for their support. He said he was proud to wear the jersey. Jackson also said, “Our youth today are our future. You are going to be out in the world… So we want to do our best as parents to make your prepared to steer our world, our country, our state, our town.” He noted that his flight out of Tampa was five hours late, and the flight from Atlanta to San Jose was canceled. He says, “but we got here, and we enjoyed every minute. Certainly the strength to get here comes from supreme being, a powerful spirit, that we can all relate to in God.” He added, “And it is so great to see everyone here holding hands and pulling the wagon in one direction.”

Reggie threw the first ball of the game. all money made from ticket sales, more than $10,000 in raffle prizes, and food will be donated to Bret Harte High school programs, and scholarship funds.

The video “Reggie Jachson Visits Angels Camp” of Seanie and Reggie is here.