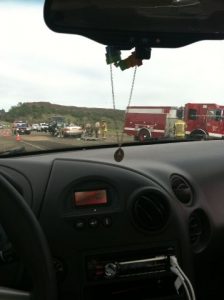 Jamestown, CA — The CHP is releasing more details on a Highway 108/120 crash that took three lives. The CHP reports the wreck happened just after three Saturday afternoon between the Yosemite turn-off and east of O’Byrnes Ferry Road. The victims were from the Manteca and Roseville area. None of the names are being released pending the notification of families.

The CHP says a 59 year old Manteca man was driving a 2000 Toyota 4-Runner going about 55 mph westbound. They say for unknown reasons he drifted into the path of a 1999 Acura driven by a 51 year old Roseville man going eastbound. The CHP report states, “Neither party had time to take evasive actions and both vehicles collided head-on.”

The highway was shut down for 30 minutes while two air-ambulances landed and took off. The roadway was down to one-way controlled traffic for an hour as the accident debris was cleared.