Questions About The Mother Lode Fair 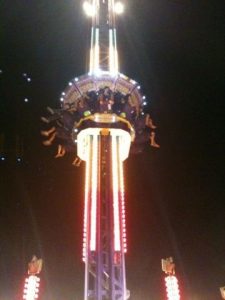 Sonora, CA — With many changes in events and leadership the Mother Lode Fair seeks community input. Chris Casassa, Marketing Manager for the Mother Lode Fair says they have created a survey “to know about your experience at past MotherLode fairs and what kind of activities and entertainment you would like to see at future fairs”.

Last year the Mother Lode Fair celebrated its 75th anniversary starting July 12th. Over its four days 16,000 visitors showed up. In 2011 14,000 were on hand for the carnival and other events. Details of last year’s event are in the news story “Mother Lode Fair Time” here.

While the fairground hosts many popular events such as the Celtic Fair, Mother Lode Round-Up, Health Fair, and Christmas Fair, their main revenue comes from the Mother Lode Fair usually held in July. With state budget cuts the fairgrounds need to come up with approximately $200,000 more per year to keep the location open.

Last week Don Bean was chosen as the part-time Mother Lode Fair Manager by the Fair Board. Former Fair Manager Jan Haydn-Myer retired after 11 years to spend more time with her family.