A Negative Opinion Of Unions 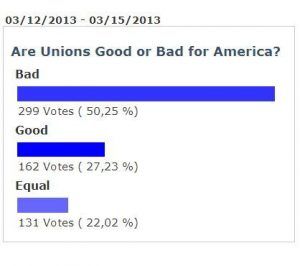 This weeks informal myMotherLode.com poll question about unions was similar to a recent “On The Street” segment conducted by reporter Tracey Petersen. “On The Street” is a weekly vignette that airs on 1450 KVML, Star 92.7 and 93.5 KKBN and is posted here.

At the end of January the U.S. Bureau of Labor Statistics reported its 2012 Current Population Survey (CPS) findings. In 2012, 14.4 million workers were members of a union. The union membership rate–the percent of wage and salary workers who were members of a union–was 11.3 percent, down from 11.8 percent in 2011. In 1983, the first year the data is available, the union membership rate was 20.1 percent, and there were 17.7 million union workers or 3.3 million more in unions than in 2012.

Current Population Survey (CPS) is a monthly sample survey of 60,000 households, highlights from the 2012 data:

Within the public sector, local government workers had the highest union membership rate, 41.7 percent. This group includes workers in heavily unionized occupations, such as teachers, police officers, and firefighters. The associated press reports that more than half of the nation’s 2.1 million government workers may be required to take furloughs if agencies are forced to trim budgets. The Defense Department expects to furlough 800,000 civilian workers for 22 days each. Other federal agencies are likely to furlough several hundred thousand more workers.