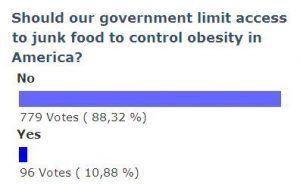 Sacramento, CA – A new poll shows most Californians see a direct link between obesity and sugary sodas. Also two out of three voters support taxing the beverages if the money goes to improving school nutrition and physical education programs. California voters continue to say obesity is a serious problem and do support measures to combat the
epidemic.


Statewide 75% of voters, including 85% of Latinos, believe regularly drinking sodas like Coke, Pepsi or Mountain Dew definitely increases a person’s chance of becoming overweight or obese. Meanwhile, just 26% say this about sports drinks like Gatorade or
Powerade.

In regards to taxing the beverages, 53% are opposed and 40% are in favor. However, support increases dramatically to 68% in favor and 29% opposed if proceeds from the tax are used to improve school nutrition and physical education programs. Support is especially strong among Latinos (79%), Asian Americans (73%) and African Americans (70%).

In a recent mymotherlode.com poll, nearly 90% were against the government limiting access to junk food to control obesity and about 10%were in favor. The poll did not ask whether a tax should be imposed to fund activity based programs.