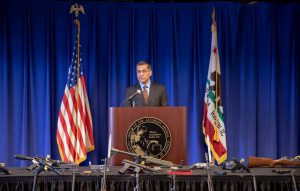 Sacramento, CA – A California gun seizure program investigated a record number of people not allowed to have firearms, but a backlog still exists — even after more than  $20 million in funding to clear it up.

State Attorney General Xavier Becerra on Friday during a press conference in Sacramento with an array of weapons in front of him blamed an increase in gun possessions and too few special agents. He went on to explain that his office may always have a problem clearing cases unless agents get raises that bring their salaries, which are 44 percent below the statewide average for entry level positions, more in line with other law enforcement agencies.

“We are using every gear to move this program,” Becerra shared. “We don’t have enough gears to keep pace with the number of people that are added to the (prohibited) list.”

Passed in 2006, the “California Armed and Prohibited Person System” (APPS) uses  five databases to cross-match and find people who legally purchased weapons but are now banned from owning one after being convicted of felonies or having a history of domestic violence or mental illness. Although agents cleared all but about 500 cases from a backlog of nearly 21,000 in 2013, $24 million in funding given that year was supposed to be enough to eliminate the backlog within three years. Additionally, despite clearing a record 10,681 cases last year, the department still has about 9,400 active cases now, about 800 fewer than it did a year ago.

“More cases are coming in than our 50 agents can process, and so if we don’t do something … we will continue to see an incremental rise in the number of cases that we haven’t touched,” Becerra said. “No one wants that.”

Becerra advised that at least 10,000 cases will likely be added to the program each year, roughly the same number that agents are clearing annually. Governor Gavin Newsom is proposing to increase funding another $5.6 million for a total of nearly $17 million in the fiscal year that begins July 1st to help with the work load. That extra money would be enough to hire 20 additional agents.

Republican lawmakers have long criticized Democrat Becerra for not ending the backlog or spending all the money they were given, mostly due to the difficulties in hiring and retaining enough special agents. State Senator Jim Nielsen (R- Gerber) who is also the senate budget committee vice chairman criticized, “We gave them almost a blank check, and it didn’t get done. They didn’t tell us they were going to have problems hiring.”

But after meeting with the Attorney General, Nielsen praised  Becerra’s call for closer cooperation with local law enforcement agencies, commenting, “I’m glad he’s finally focused that this has got to be a sustained, long-term, high priority within the attorney general’s office.”

Along with higher wages, Becerra says modernizing the department’s data system is needed. He is also calling for weapons to be seized as soon as individuals are convicted, given domestic violence restraining orders or adjudicated mentally ill. Speedier seizures are one goal of a 2016 voter-approved initiative sought by Newsom, but Becerra said it’s too soon to see results.

A copy of Becerra’s report can be found here.