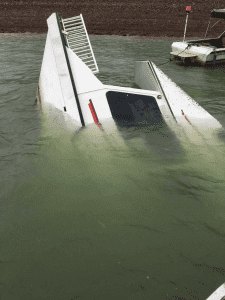 Angels Camp, CA – While winter storm-related flood incidents and power outages are usual seasonal occurrences in the Mother Lode news of a houseboat capsizing is rare.

Unfortunately, for houseboat owner Robert Taylor, who co-owns Sonora-based Taylor Masonry, he was on the receiving end of that bulletin this morning, when he got the call from New Melones Lake Marina that the 50-foot boat his family has owned for the past decade was underwater.

Marina manager Garrett Collum tells Clarke Broadcasting that Taylor’s houseboat was the major casualty in Wednesday night’s squall although the conditions knocked several docks about, loosening them from moorings. He adds that it has been years since something like that has happened there it is a bit of a freak accident.

As for how much it might cost to raise and possible repair the houseboat, “I don’t know costs or anything like that,” Taylor confides. “Until the insurance company adjustor looks at it, we won’t know if it is totaled or not. We don’t know if the bottom or the sides got damaged, if [the boat] slipped into something else…maybe a log – it is just a guess at this point.”

“More than likely it was just the wind,” he continues. “The wind caught it a certain way and it was what [marina management] told us, too…that it probably flipped it. Then with the waves, it just started submerging it and that’s it – it’s over.”

While awaiting word on whether or not his capsized craft is salvageable and at what cost, besides damaged dishes and other household things, Taylor laments some of the probable losses. “[There are] a lot of memorable things like pictures.” To view a photo of the sunken boat, click into the image box.