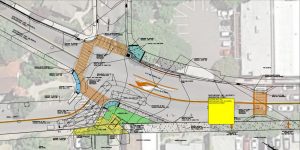 After a rash of accidents, like the one reported here just this past summer involving a vehicle versus a pedestrian at the intersection of Washington/Highway 49, Snell and Elkins streets near the church, the city hired Willdan Engineering to come up with design improvements for the intersection. (A detailed list of the changes and a rendering of those upgrades can be found below.) The firm will give a review of the plans and along with city staff will be on hand to answer questions from the public at an open house on Tuesday (Dec. 11). The meeting will run from 4 p.m. to 6 p.m. at Sonora City Hall located at 94 N. Washington Street in the council chambers.

After the open house, the City Council will get a look at the plans at their next meeting on Monday, Dec. 17th at 5 p.m. at the same location. City officials note that council directives will be added to the plan and submitted to Caltrans. Once approved, the next step will be to apply for funding from the California Transportation Commission in April of next year with a target of construction to begin in the fall.